Throughout the year, the WHS holds a variety of events that are designed to engage and create fellowship opportunities for members.  In 2022, there are important events in Wachovia celebrating historic anniversaries.  See the listing below!

Register for Event Sold out

Wachovia Historical Society conducts Raffle events periodically during the year. The first WHS Raffle was held in the Summer of 2021, with the prize of a trip to a selected destination in the U.S. The winner of the Summer Raffle was Betsy Overton. The second Raffle was held in the Fall of 2021, with the prize of a free carriage ride through Old Salem, offered by Steve Allred. The winner of this raffle was Kae Roberts. Zevely Inn sponsored the WHS Spring Raffle with a special overnight filled with entertaining mini tours about the rooms of the Zevely Inn. Barbara Strauss was the winner. Our latest winner is Carol Owens, who won the $250 gift certificate from the award Meridian Restaurant, right here in old Salem. Chef Mark looks forward to creating delicacies for Carol.

Thanks to all for their generous support for these events.

Ideas for raffles or events? Love to help with and plan events? The Guild welcomes volunteers. Contact Victoria 828.258.3499 or ortonacademy@nullgmail.com

Have you ever wondered about those historic buildings not included in the Old Salem tour? On the first Sunday of each month, the Wachovia Historical Society Guild (WHSG) offers an event for lovers of Wachovia history—many of which are held in private residences.

Many Old Salem residents are eager to share their love for the history of their homes by hosting talks and Guild events. Cherie Gordon’s recent sponsorship of the Summer Raffle (for an overnight stay at The Zevely Inn) is a prime example. Recent raffle winner Barbara Strauss (see “WHS Raffles”) looks forward to a private tour of the Inn, a special talk on its history, and hors d’oeuvres as part of her overnight stay.

Attendance for Guild Events is limited to small groups, and participation fosters friendships. Each talk or walk is followed by hors d’oeuvres and chatting with your fellow patrons of history. Active membership in WHS (yearly dues up to date) is the only requirement for attendance, and monthly events are listed on the first of each month on the WHS website.

January 8: Barara Strauss, the 2022 Archie K. Davis Award winner, shared her 50-year love for Moravian music and the musical discoveries she uncovered while cataloging the music stored in the Moravian Music Foundation Archives.

December 3: Moravian Market and the Hanging of the Garlands

October: Tailgate party: a chance for all event participants to reconnect before the Annual Event

April: Narrative of the final group of Moravians who walked from Pennsylvania to Bethabara in preparation for the founding of Salem

Check back here as events are added

2018 The Moravian Way of Health and Healing

On April 8, 2018, Wachovia Historical Society and Old Salem Museums and Gardens partnered to present a Medical Readers’ Theater performance of “A Face of Stone” by William Carlos Williams. 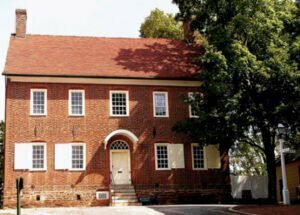 The short story tracks the evolution of a complex physician/patient relationship in which a busy physician takes an instant dislike to a young immigrant couple who brings their infant to the office for a check-up. The readers and the narrator for the performance were medical students and emeritus faculty from Wake Forest University School of Medicine. Society board member Dr. Gene Adcock moderated the program and facilitated the discussion after the performance. The 23 attendees, including the performers, participated in a provocative and insightful conversation after the performance. Dr. Tim Kute shared this response, “I thought that the presentation gave everyone a feeling of how medicine was practiced at that time. One could see the prejudices but also the feelings that taking care of people was very important to the doctors. It was also nice to visit the doctor’s house and examine what he had to work within his practice.” Following the discussion, participants were treated to a tour of The Moravian Way of Health and Healing in the Doctor’s House (pictured above left).

Each of us is concerned about health, our own and others. Stories such as “A Face of Stone” reflect real-life settings that we can contemplate and relate to. The Medical Readers’ Theater setting provides a safe and encouraging space for performers (readers) and the audience to exchange thoughts and feelings about the issues embedded in the story. On April 8 both physicians and “laypeople” shared individual perspectives and appreciated the opportunity to exchange ideas. 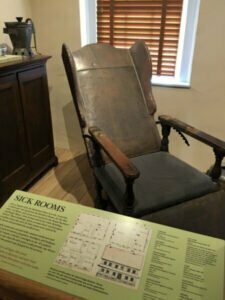 Winston-Salem has a wealth of historical and medical resources that tie together the past and the present. The Medical Readers’ Theater concept encourages anyone to perform and initiate thought-provoking conversations that focus on issues pertinent to the physical, spiritual, and psychological aspects of health and healing 200 years ago and today.

The Society looks forward to hosting future Medical Readers’ Theater events and, perhaps, creating scripts of stories preserved in records of the Moravians in Salem. (Above, a “sick room” in the Doctor’s House.)

(This article, by Peggy P. Dodson, appeared in the Summer 2018 Issue of The Wachovia Tract.)

Saturday, May 16, 2015, was a beautiful day as a group of excited folks gathered at the Old Salem Visitors Center to learn about the last days of the Civil War in North Carolina. The tour was co-sponsored by the Wachovia Historical Society and Old Salem Museum and Gardens. Chris Hartley, a Society Board member, Civil War scholar, and awarded author, led the tour.

First stop, Shallowford Crossing. This ford had been used for years by Native Americans, hunters, Revolutionary War soldiers, and others. This was the ford that Union General Stoneman’s troops crossed in April of 1865 as they headed to Salisbury, their ultimate military objective. Along the way, the Union Calvary fought several skirmishes as it moved near the Mocksville and Cooleemee areas toward Salisbury.

Grant’s Creek was the site of a major battle just outside of Salisbury. At this location, Mr. Hartley explained the battle tactics that ultimately led to a hard-fought Union victory. The goals of this Campaign were to destroy the rail facilities and supplies at Salisbury and also to liberate and destroy the Confederate Prison. The Union troops destroyed supplies, capturing and burning enough of them to support a huge army. Supplies included small arms, artillery ammunition, uniforms, blankets, cotton, corn, rice, hams, beef, whiskey, etc. The troops also burned many Confederate facilities, hospitals, cotton factories, foundry, etc. It was said that the fires could be seen many miles away. A determined objective of General Stoneman was to liberate the Prison. Earlier, the General had been a prisoner of war and was freed in a prisoner exchange. To his dismay, the Salisbury prisoners had been moved to other prisons, except for a few who were feeble and sick. The Union troops burned the Prison.

After Salisbury was in Union hands, troops moved on Ft York. It was a Confederate Fort on the Davidson County side of the Yadkin. Ft York was probably designed and engineered by Confederate General P G T Beauregard. The earthen Fort sits high on a cliff above the Yadkin. It is on private property and, as a result, is amazingly unchanged after 150 years. The Fort consists of several artillery batteries connected by infantry trenches. The transverses in the trenches were also well defined. The purpose of Fort York was to protect the railroad bridge over the Yadkin. The Union troops fired rifles and artillery on the Fort for several hours and were met with superior fire from the Confederate artillery. As a result, the Union soldiers withdrew, the bridge was spared, which marked one of the last Confederate victories of the Civil War. At this site, we also learned about preservation efforts and plans from the Civil War Preservation Trust.

In Salisbury, the group visited the Rowan Museum, an 1854 Courthouse that survived Stoneman’s Raid. Many Civil War artifacts were on display. The tour included a visit to the National Military Cemetery in Salisbury. Here are rows of unmarked graves from this conflict. The group also visited the Confederate Prison located next to the Cemetery and the Guard House, which the Union soldiers did not burn.

The tour ended back in Old Salem at St. Phillips Moravian Church where a re-enactor of the Chaplain of the Army of Ohio gave a brief sermon and then read the May 21, 1865, proclamation that all slaves were free. This was followed by his encouragement to the freed people to be industrious and pious. The Service concluded with the Lord’s Prayer. 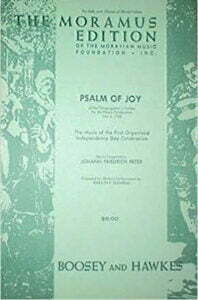 On July 4, 1783, the citizens of Wachovia celebrated our nation’s independence in what was the earliest documented observance of the day. Among the events in Salem was a performance of Freudenpsalm, or Psalm of Joy, compiled by Moravian composer Johann Friedrich Peter.

On July 4, 2014, Psalm of Joy was performed in Home Moravian Church by the Moramus Chorale and Orchestra. Sung in German to replicate the 1783 performance, this music thrilled the large audience.

The Wachovia Historical Society was pleased to co-sponsor this concert with Old Salem Museums & Gardens and the Moravian Music Foundation. This is another example of our commitment to the presentation, interpretation, and dissemination of the history of Wachovia and surrounding North Carolina.