A New Chapter in the life of Adam Spach 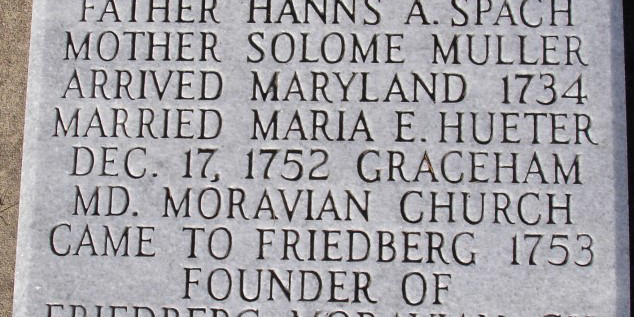 Some might say, “It’s a miracle!” Some might say, “The stars are aligning!” Whatever the perspective one may choose, the fact is that we are seeing events falling into place for the realization of a 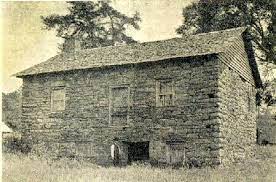 beautiful historic park at the Adam Spach Rock House property (see pictures at right) right outside the southwestern corner of the original Wachovia tract in the Friedberg area. Through the hard work of our Properties Committee, comprised of Dr. Ricky Sides, Chair, John Hauser, John Larson, Peck Spach, Bill Phillips, Jimmie Snyder, and Rob Spaugh, the historic park is in sight. Meetings have been held with the NC Department of Historic Preservation, the NC Archaeology Department, Preservation NC, and the Davidson County Planning and Recreation Departments to collaborate on a park design.

The biggest boost for the park is the recent agreement with Scott Wallace of Keystone Homes and the Homeowners Association of the new Friedberg Village Townhome complex to give Wachovia Historical Society a permanent easement over the flood plain portion of their adjacent property which will add more than 25 more acres to the park. With this additional acreage for a total of over 30 acres, the park will have walking trails, natural picnic areas, and historic markers, and informational kiosks will be placed at the Rock House ruins and on the portion of the old Cape Fear Road (circa 1750s) which is the eastern boundary of the Rock House property. This particular section of road was the major highway to the Cape Fear area of NC, Charleston, SC, and all points southeast during the settlement of the Wachovia tract. The stone bridge buttresses are still visible on both sides of Millers Creek.

The conversation for a park at the Adam Spach Rock House property began in 1917. Mr. Henry Wesley Foltz, a member of WHS, urged the Society to “investigate and take such action as might be 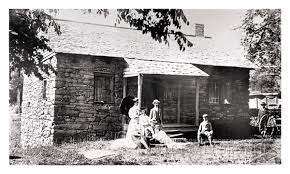 deemed advisable” to purchase and preserve the Rock House property. Mr. Foltz began preparing to assist in raising funds for the project by compiling a book, Descendants of Spach, published in 1924. The proceeds of the sale of the book established the Adam Spach Rock House Fund, which helped provide for the purchase of the property in 1930. On October 9, 1927, Mr. Foltz presented a program on the life of Adam Spach at the Rock House site, and nearly 1,000 descendants and neighbors were in attendance. On June 9, 1930, two deeds were recorded giving WHS ownership of the property and an avenue of approach. Henry Foltz died on May 1, 1933, realizing this first chapter in the life of the Adam Spach property and WHS.

Through the decades to follow, many attempts were made to reignite the flame for the project, and some were almost successful. Other pressing matters, however, took priority as WHS grappled with very important issues pertaining to the preservation of our artifact collection and document archives, which since have become the foundation for the collection at Old Salem Museums & Gardens and the Moravian Archives of the Moravian Church, Southern Province. Throughout the 1950s, all attention went to the restoration of Old Salem, a project in which WHS played an integral role.

Who was Adam Spach (see gravestone at right), and why is he important in our history? Research reveals that Adam Spach was first and foremost a man of great 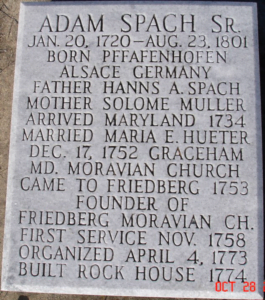 strength of character. He did not pursue fame or wealth but simply focused on serving. When he first heard of a settlement to be established in the backwoods of Carolina, he wasted no time in coming with his wife, infant son, and worldly goods to the area, after immigrating from Alsace (on the border of France and Germany, but today officially part of France). As the trustees of the new Wachovia tract were not even ready to begin selling tracts in 1754, Spach claimed a 260-tract just south of the Wachovia tract line where he built a small log cabin. As the French and Indian War wore on and having to take refuge in forted Bethabara, Spach built a 30′ by 36′ stacked-stone house, complete with portals for long rifles. This house was built over a spring with an opening in the basement walls for livestock to come in.

Adam Spach believed deeply in both intellectual and spiritual training. After traveling some 14 miles by wagon or horse to attend church services in Bethabara for several years, Spach also held worship services in his home. Not long after, a group of neighbors joined together to build a meeting house for both school and church which were the beginnings of Friedberg Moravian Church. Spach donated the land upon which Friedberg’s God’s Acre is located, and he built a road to Bethabara to facilitate faster transportation. He served his fellow Moravians by hauling goods to and from Bethabara or Salem to outlying areas. Spach was the person the settlers looked to in dealing with the Crown pertaining to their conscientious objector status and with delivering the Moravian “declaration” to the Governor’s military leadership. In most cases, harsh fines were levied against the Moravians because of this moral code. Spach had no problem, however, in transporting supplies to the Patriots when the Revolution was in full swing.

Probably the greatest contribution of Adam Spach is his progeny. Numbering by now in the tens of thousands, many of his descendants remained in Piedmont North Carolina, and built the area. Names like Foltz, Fishel, Berrier, Mickey, Sides, Hanes, Hartman, Mendenhall, Tesh, Korner, Snyder, Stoltz, Reich, Patterson, Gray, Bahnson, Fries, 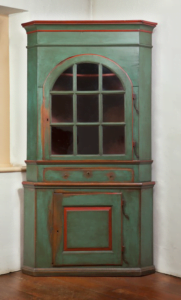 Many of these families have made lasting contributions to our community and quality of life. This digression into the life of Adam Spach is important in understanding the cause of this fitting tribute to one who was determined to make a better life not only for his own family but also his neighbors as well. We are better off as a society because he lived among us.

Now back to the Park…..The Adam Spach Rock House project will be done in phases. The first phase will involve clearing the property for an in-depth archaeological study to be overseen by Mo Hartley, retired Archaeologist of Old Salem. In 2002, Mo and Martha Hartley were instrumental in conducting the research for the National Registry of Historic Places application. The property received that coveted designation on June 14, 2002. Walking trails, picnic areas, and historical markers will follow. The project will progress as grants and contributions are realized. We are grateful for this opportunity to be a part of providing this space for recreation, meditation, and good health, and in commemorating a life well-lived. Please join us as we embark on this preservation journey. We hope that Adam and Maria Spach and their descendants are smiling today!