The Wachovia Historical Society (WHS) was organized on March 18, 1895, with 36 members joining, and H. F. Shaffner was elected president. The WHS grew out of the Young Men’s Missionary Society (YMMS), a committee of which met on July 26, 1894, for the purpose of organizing a historical society. Gaither F. Jenkins was chairman of this committee.

The YMMS was organized in 1840 and began with specimens and information about natural history and cultural practices collected by a worldwide network of Moravian Missionaries. This collection grew with the same kind of specimens and information from Salem and surrounding areas. Existing records show that at the time of the merger of YMMS into WHS. 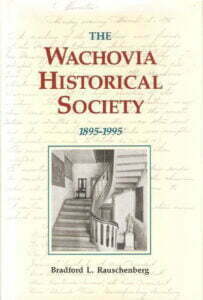 Today, the members of the WHS oversee a collection of over 6,500 artifacts, art, furniture, historical documents, and photographs.

Click here to purchase this and additional resource books.

2022 WHS Board of Directors

The tract of land called “Wachovia” is the area settled by the Moravians in the 18th century with the purchase of 99,985 acres in what is now primarily Forsyth County, North Carolina. Establishing settlements in this area and Bethlehem, Pennsylvania, was the vision of Moravians in Europe, especially Count Nicholas von Zinzendorf (1700-1760). A count of the Roman Empire, Zinzendorf had initially offered sanctuary on his estate to persecuted Czech protestants seeking a place to worship freely, following the 30-years war (1618-1648). Ultimately, this area in Germany became the center of the Moravian Church with the establishment of the town of Herrnhut on Zinzendorf’s land.

The purchase of the Wachovia tract of land was executed by Frederick William Marshall (1721-1802), who, according to the Reverend Dr. C. Daniel Crews, former Archivist of the Moravian Church Southern Province, “determined the physical, economic and spiritual shape of early Wachovia.” Marshall was in fact Zinzendorf’s “agent” in the purchase of the 99,985 acres Wachovia tract. Also instrumental in the development of the Wachovia tract was August Gottlieb Spangenberg (1704-1792), who led an expedition in 1752 to the tract where the settlements were to be established. Within the tract emerged the settlements of Bethabara (1753), Bethania (1759), and Salem (1766).

Wachovia was named for the area along the Danube River in Austria where the ancestors of Count Zinzendorf had lived.

The Salem Tavern, established in Salem in 1772, passed through a number of owners and ceased operating as a hotel about 1890. When the restoration of Old Salem began in the 1950s, the tavern building was given to the Wachovia Historical Society.

The building was leased to Old Salem, Inc., for careful, authentic restoration to its eighteenth-century character, and is open for guided tours.

The Spach Rock House was built in 1774 by Adam Spach, the founder of Friedberg Moravian Church, which was opened in 1772. The WHS has had possession of the property and the remnants of the house since 1917. With the help of donations, we are looking to develop a park around it for people to enjoy.

Scrapbooks. Today the word calls to mind a collage of festive paper, ribbons, glitter, charms, photos, and other embellishments. But not the worn leather scrapbooks belonging to the Wachovia Historical Society, which are preserved in the research area of the Horton Center, Old Salem Museums, and Gardens. These scrapbooks, containing essential stories, are much more akin to those scrapbooks dating back to the thirteenth century. Those pre-printing-press books, often called commonplace books, were assemblages of “scraps” of information that the collector deemed necessary for reflection as seasons and years passed.

Collections The Wachovia Historical Society is a repository for many artifacts and collections that reflect the history of Forsyth County and the Wachovia Tract.

WHS established the Archie K. Davis Award in 1999 in recognition of the contributions of Archibald Kimbrough Davis (1911-1998) to the study and appreciation of the history of North Carolina and our nation. This award, presented annually by the Society, recognizes an individual whose outstanding contributions and devotion to the history of our region, state, and nation have enriched the appreciation of our heritage.

Archie K. Davis, a revered and respected banker, statesman, and a lifelong student of history, especially the history of his beloved North Carolina and the Civil War. His professional life and service to our community were characterized by grace, gentility, intellect, enthusiasm, perseverance, and humility.