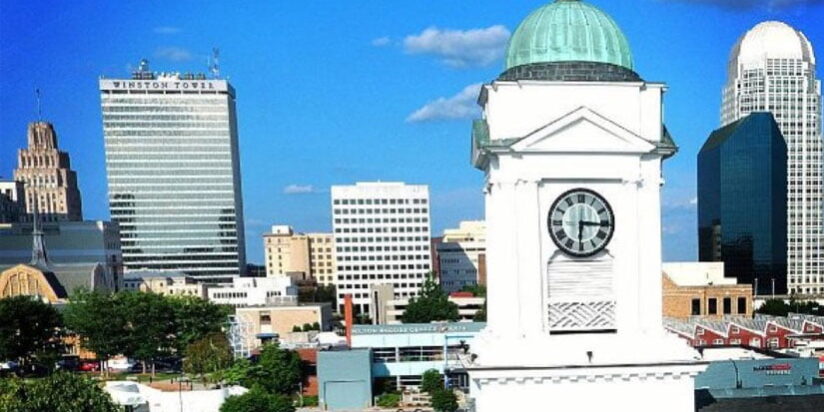 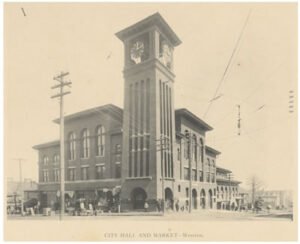 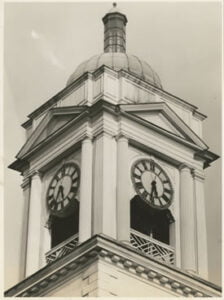 As it worked out, Winston-Salem’s Old City Hall (located where the Reynolds Building is today) was being razed. Louis Owen, a member of Home Moravian Church and the Traffic Manager of Reynolds Tobacco Company bought the clock and gave it to Calvary Moravian Church. All we had to do was install it. But that proved a question: No one knew whether it could be fit into the belfry or whether we would have to install a single face on the gable end of the church (as was done at Home Church).

The Old Town Clock was an object of sentiment in Winston-Salem. The newspaper noted it had tolled for the funerals of prominent citizens, had rung “riot call” to rally the home guard when disturbances threatened, and had served as the Town fire alarm for years. When it was announced that the Town clock would become a part of the new Calvary sanctuary, the newspaper rejoiced that “when Third Street is extended as planned”, the Church would be on an important corner and “practically in the heart of the City.” The newspaper continued to extol the elevated location of Calvary Church and was delighted the sound of its bell would continue to be heard in the heart of Winston-Salem. 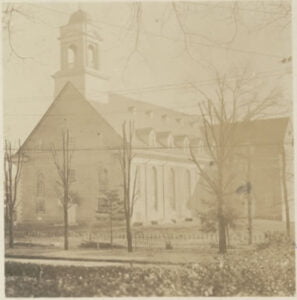 When in the Town Hall the Clock had been wound on Friday of each week by W.T. Vogler Jewelry Company. Hand winding by a system of pulleys continued until around 1972 when the clock was electrified. It hasn’t been as dependable since. The Seth Thomas Clock Company had built the clock itself as number 739 in the series. The works are dated February 1, 1893. The works also bear the name of A.J. Hotchkiss, whose role in the construction of the clock is unknown. The Seth Thomas Clock Company was contacted to supervise the installation of the clock and happily, was able to fit it into the belfry where, from a height of 74¼ feet, it could be heard and seen a substantial distance. It was no small job: The clock face alone measures sixty-three inches in diameter.

Today, the clock still keeps accurate time as it rings in the times and seasons for the residents surrounding Holly Avenue!