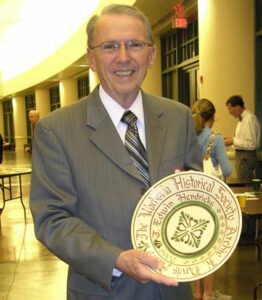 “Those of you who knew Archie Davis, know he had a great love for history and a deep respect for those who were writers and teachers of history. If you add to writer and teacher a person who also appreciates local Wachovia history and has been a leader in the Wachovia Historical Society, you have a summary of the person who is to receive tonight The Archie K. Davis Award for History. The recipient is a man who has taught history for 45 years, has 49 titles on his academic Publication List, AND was president of our Society for four years -1984 -1987.

“Dr. J. Edwin Hendricks was born in Pickens, SC, earned a B.A. in History at Furman University, and a MA and PhD in American History at the University of Virginia. He served two year on activity duty as an officer in the U.S. Army Reserve and then settled down to be a teacher and a writer. Our community was fortunate that he selected Wake Forest University were he became an Assistant Professor in 1961 and is still carrying a full teaching load today. Along the way he was promoted to Associate Professor, Professor and was Chair of the History Department from 1995 to 1999. He has told his wife, “When I stop whistling as I leave the house, it will be time to retire”.

“Do you have a bomb shelter in your back yard? Ed does. He teaches a seminar for 1st year students – Fall Out Shelters and the Cold War: Weapons, Propaganda or Survival Technique – and brings his students to his home to let them see first hand how some citizens in our area prepared for survival during that troubling period. This is an example of his creativity.

“Those of you who have been a member of the Wachovia Historical Society for a number of years and have been attending our annual meetings may well remember when Ed was President. At his first annual meeting as President, he presented a paper – The Wachovia Historical Society and Preserving the Past and at the annual meeting in 1986 toward the end of his term, he presented a paper– The Wachovia Historical Society at Work. How many past Presidents can match that? But writing papers was not all he did while he was President. Under his leadership, an inventory of the WHS collection in the Hall of History was undertaken so the collection could be removed and stored in preparation for the removal of that building. He also successfully increased efforts to market WHS publications through hiring a graduate student to sell the Society’s books by seeing that they were placed in area bookstores.

“A key contribution of Ed to the history of our Society was as a mentor and teacher. The 100th year of WHS was celebrated with the publication of Brad Rauschenberg’s excellent book, The WACHOVIA HISTORICAL SOCIETY 1895 – 1995 and Brad gave a fine talk at the annual meeting that year. In the Acknowledgements to his book, he wrote – “My thesis in the Wake Forest University history program provided the genesis for this book. I owe a debt of gratitude to Dr. J. Edwin Hendricks, Chair of the History Department, who provided guidance from his extensive knowledge of Salem and Winston-Salem history, as well as his special insight as past president of the Wachovia Historical Society”. If you don’t have a copy of Brad’s fine book, Richard Starbuck has them in the lobby for purchase after the meeting.

“Many of you know outstanding graduates of the Wake Forest Law School. Do you think the Law School would have anyone but the best write their history? They did not. WAKE FOREST UNIVERSITY SCHOOL OF LAW: One Hundred Years of Legal Education, 1894 – 1994, the author was Dr. Hendricks. What about the NC Bar Association? Who do you think wrote – SEEKING LIBERTY AND JUSTICE: A History of the North Carolina Bar Association, 1899 – 1999? You are right – Dr. Hendricks. The Society papers and these books are but a few of the 49 titles in his list of Publications.

“So, what has Ed been doing in his spare time for his community, state, and church? How about serving as president of a few organizations like the W-S Kiwanis Club, Torch Club, Historic Winston, NC Literary and Historical Society; or Chair of the WS/Forsyth County Historic District Commission; Trustee of Historic Bethabara, Inc. for 24 years; Diaconate Chair of Wake Forest Baptist Church; or Broad member of the NC Transportation History Corporation. He has also been a Preservation Consultant from 1973 to the present.

“Dr. Hendricks has received a number of Honors and Awards including – Wake Forest University Alumni Council Community Service Award – 1990, and Kiwanis International Outstanding Club President, 1988. His key award, however, was when he won the hand of his wife, Sue James from Martinsville VA, after they met at Furman. They have three grown children: James, a writer in Wilmington; Christopher, a PhD history professor at Armstrong Atlantic State University in Savannah, GA; and Lee Hendricks Turpin, an attorney in Chatham, VA. They also have two grandsons, Grayson and William.

“It is my privilege, on behalf of the Society’s Board of Directors, to present The Archie K Davis Award of History for 2006 to Dr. J. Edwin Hendricks.”