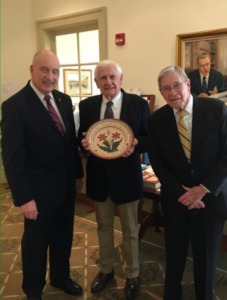 Frederick Pfohl Spach was the 2020 recipient of the Archie K. Davis Award. Mr. Spach is a native of Winston-Salem where his family has long been involved in the business, cultural and religious affairs of our city. His roots, however, trace to the Friedberg community.

He is a graduate of R.J. Reynolds High School and Davidson College. He served in the United States Army during the Korean War. Now retired, he had a very successful career as a stockbroker. He has a lovely wife (Gerrii, pictured at left with Peck), and they have three children. He is a lifelong member of Home Moravian Church, where he has served as an Elder and a Trustee. He has served on various church boards and committees. He served as a member of the Board of Salem Congregation. In addition to his church work, he has been active in Forsyth Jail and Prison Ministry. He has delivered Meals on Wheels for Senior Services and has volunteered at the  Shepherd’s Center. He is a member of Old Salem’s Frederic Marshall Society. The man we honor has a strong interest in history, especially in that of Wachovia. He has for many years been a valuable member of the Wachovia Historical Society, serving multiple terms on the Board of Directors, including two terms as President. Whenever there is a project or concern of the Society, he is quick to lend his knowledge and energy. As an advisor, he continues to assist the Board in carrying out its mission.

Mr. Spach recipient has a keen interest in the protection, preservation, restoration, and useful development of the Rock House property which is owned by the Society. This daunting task never discouraged his zeal, as he is an eighth-generation direct descendant of its builder, Adam Spach. For years of services to church and community and to the Wachovia Historical Society, for a keen interest in the early years of Wachovia and for being a good resource for all his fellow society associates, the Wachovia Historical Society gratefully presents its highest honor, the Archie K. Davis Award, to Frederick Pfohl (Peck) Spach.
Contributed by Tom Williams[/vc_column_text][/vc_column][/vc_row]