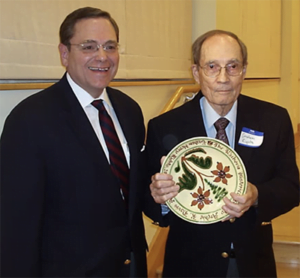 “In recognition of the contributions of the late Archie K. Davis to the study and appreciation of the history of North Carolina and our nation, the Wachovia Historical Society established the Archie K. Davis Award in 1999 to recognize individuals whose outstanding contributions and devotion to the history of our region, state and nation have enriched the appreciation for our heritage. Recipients of the award are individuals who have made significant contributions to the knowledge and appreciation of our history in fields of literature, architecture, archeology, conservation, journalism and archival work.

“When this year’s recipient of the Davis Award was born, his father was in his eighth year as President of the Wachovia Historical Society, a service he rendered for 28 years. (1928-1956 with the exception of one year) Reared in a home where the history of Wachovia and its environs were both taught and revered, this year’s recipient of the Davis Award has exhibited a life-long interest and passion for preserving, studying and promoting the history of Wachovia.

“His father’s keen interest in the history of Native American peoples who lived in North Carolina led to the publication of The American Indian in North Carolina in 1947. For many years, a portion his collection of Native American artifacts was housed in the Wachovia Historical Society Hall of History until the collection was donated to the Museum of Anthropology at Wake Forest University where it is currently housed. Another portion of his collection is now at the University of North Carolina at Chapel Hill. Together the two portions consist of over 60,000 Native American artifacts that were acquired 1915-1950 in the piedmont of North Carolina. Our recipient well remembers arrowhead hunting with his father as he acquired many of these artifacts. These early experiences were pivotal in advancing our recipient’s life-long interest in the history of this region.

“This year’s recipient wrote “The Wachovia Historical Society and its museum in the Boy’s School and the adjacent Hall of History were very much a part of my life. The contents of the museum continue to be etched in my memory.” As Old Salem will soon begin a restoration of the Boy’s School, it is interesting to note that in the summers of 1953 and 1954 this year’s recipient worked under the late Frank Albright to help set-up exhibits for the Boy’s School museum and Hall of History. Our recipient notes that he and his brother worked on the exhibits for the whopping salary of $1.00 per hour!

“This childhood interest in history continued with our recipient graduating from the University of North Carolina at Chapel Hill with a BA in history. As a student at Moravian Theological Seminary he was co-winner of the Herman T. Frueauff Memorial Prize in Moravian History for his research project on Moravian work among the Tibetans. This was later the basis for a Women’s Fellowship study for both Northern and Southern provinces of the Moravian Church entitled, On the Roof of the World. He is the author of 1901-1902: Glimpses from the Boyhood Pen of Douglas L. Rights. The book outlines a presentation he gave to the society’s annual meeting in 2003.

“His genealogical work now includes a record of 2,548 descendants and their spouses of his ancestor Matthew Reutz, a Dane who came from Europe to America with the Second Sea Congregation in 1743.

“Throughout his distinguished service to the world wide Moravian Church as a pastor, administrator and bishop, this year’s recipient has been a strong advocate for historic education and preservation. During his service as President of the Provincial Elders’ Conference of the Southern Province, he was instrumental in initiating a study of building needs which eventually led to the construction of the Archie K. Davis Center which today houses the Moravian Archives and the Moravian Music Foundation.

“For nine years our recipient served on the Board of Directors of this society, chairing the Annual meeting committee as well as serving for five years on the Cherokee-Moravian Historical Association.

“Throughout his service to the Moravian Church, this year’s recipient of the Davis Award has exemplified the Moravian ideal of service. His humility speaks well of his Moravian roots as does his abiding faith, love of church and family, and his passion for preserving and promoting the history of this land once called, “Wachovia.”

“Therefore, it is my honor and privilege to present this year’s Archie K. Davis Award to the Rt. Rev. Dr. Graham H. Rights.”