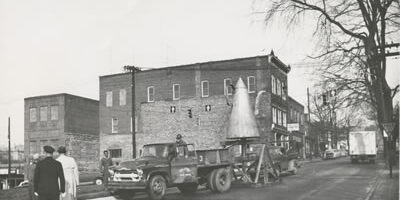 Before the Industrial Revolution, merchants and artisans marked their shops outside by hanging symbols of their trade. While the custom survives in Europe, it is largely limited in the United States to places like Old Salem where the visitor can identify the signs of glover, gunsmith, and shoemaker. 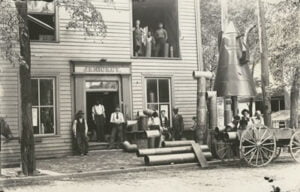 The most prominent survivor in Salem, however, is certainly the tin coffee pot at the junction of South Main Street, Old Salem Road, and Brookstown Avenue.  It was erected in 1858 by the Mickey brothers, Julius and Samuel, tinsmiths, in front of their shop at South Main and Belews Streets.  Samuel is also to be remembered as the director of Salem’s 26th North Carolina Regimental Band.

L. B. Brickenstein later acquired the property that was purchased in 1924 by members of the Vogler family. The Wachovia Historical Society was asked to accept the structure for exhibition in the Boys School Museum but there was no place for it there. It was too big so a second home was found at South Main Street and Brookstown Avenue. Later it was saved from destruction when Bishop Howard Rondthaler pointed out its historical importance as a marker of the border of Salem. Winston-Salem then acquired the coffee pot and it came to be regarded as a city landmark. Bishop Rondthaler may have had other concerns. As recently as 1948, his last year as president of Salem College, first-year students could not go north on South Main Street beyond the pot without signing out. It separated Salem from Winston, still viewed by some as a threat to the virtue of young ladies.

It is a big pot with a volume of 740 gallons. It is 7 feet 3 inches tall, its diameter at the top is 27 inches, and at bottom 64. It has been claimed that in the 19th century a small boy often shinnied up to its trap door to light a fire inside to boil water so that steam would come out of the spout. Some say that water for coffee was prepared this way for throngs attending love feasts at Easter and Christmas but no information is available about how the pot was filled, how coffee was added, and how it was poured after it was judged drinkable. A Union soldier is reputed to have hidden there during the Civil War but no details have been found. As far as is known no Confederate deserters sought refuge there.

How did the treasured artifact get to its present location when it had to be moved from the path of Interstate 40 in 1960? 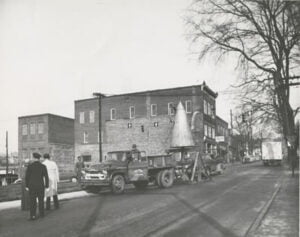 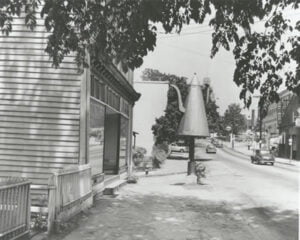 James A. Gray found the site where it stands today just south of Interstate 40. On March 14, 1976, the Wachovia Historical Society placed a commemorative plaque at its base.