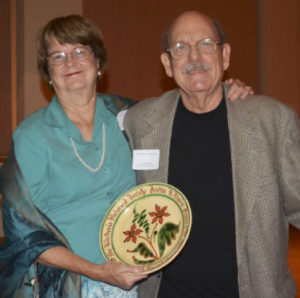 A former research and restoration director and a very familiar face across the decades at Old Salem, Mr. Bradford L. Rauschenberg received the 2017 Archie K. Davis which was presented by Mo and Martha Hartley on behalf of the Society.

Brad was the 20th recipient of this prestigious award which is presented at each annual meeting. Brad’s involvement with Old Salem spanned many years, and he was a major force in the development of the Museum of Early Southern Decorative Arts, an internationally known museum. Brad, a native of Atlanta, is a graduate of Georgia State College and earned his Master of Arts in History from Wake Forest University.

He was awarded a Doctor of Philosophy degree from the Kendall College of Arts and Design in 2006. Dr. Rauschenberg is the author of multiple books including The Furniture of Charleston, 1620-1820 (The Frank L. Horton Series) and a centennial history of The Wachovia Historical Society, 1895-1995. Brad has also been a member of many historical societies including the Organization of American Historians, the Southern Historical Association, the Furniture History Society, and the Society of Historians of the Early American Republic, to name just a few!

Dr. Rauschenberg’s accomplishments clearly support his election to the distinguished roster of recipients of the Archie K. Davis Award and to the historical “ideals” and vision of Mr. Davis.