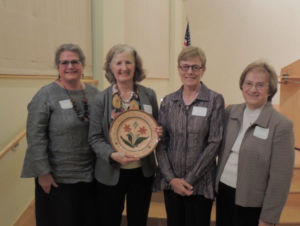 The 2018 Archie K. Davis Award for History was awarded to Paula Welshimer Locklair. Paula was recognized for her outstanding accomplishments in the field of history. Earlier in 2017, Mrs. Locklair completed 46 years of service at Old Salem Museums and Gardens where since 2005 she was Vice President of Education. She has also authored or co-authored several publications interpreting the history and culture of the Moravians. Mrs. Locklair was the primary driving force behind the historically accurate restoration of the 1800 Tannenberg Organ (originally in Home Church) and its “new” placement in a space appropriate in size and acoustic design, spearheading the $600,000 campaign for the organ restoration and the $3,000,000 campaign for the auditorium in which to house this magnificent instrument. CBS News, in a story from April 9, 2004, aptly describes Paula Locklair as the “guardian angel” of the 1800 Tannenberg organ. It was very appropriate that Paula received the Davis Award in the same place where the Tannenberg organ now is located.

Mrs. Locklair is married to Dr. Dan Locklair, Professor of Music and Artist-in-Residence at Wake Forest University. Mrs. Locklair also serves on the Board of Trustees of another important historical (and musical) Winston-Salem institution, the Moravian Music Foundation.

Mrs. Locklair joins a long and distinguished list of previous Archie K. Davis Award winners. In 1999, the Wachovia Historical Society established the Archie K. Davis Award for History to recognize an individual whose outstanding contributions and devotion to the history of our region, state and nation have enriched the appreciation of our heritage. That year Mr. Stephen Triplett, President of Trotman’s Picture Framing and Gallery, created a striking Davis Award plaque to honor his close friend, Mr. Davis. The first seven nameplates of honorees were affixed, but then this commemorative piece was “lost” behind other pictures and paintings until it was discovered earlier last year. Mr. Triplett kindly restored the plaque matching nameplates for all 20 recipients through 2018. Each year, the Davis Award is as new and fresh as our beautifully refurbished plaque.