Join We All with One Accord: A History of Moravian Hymnals in 650 Words or Less 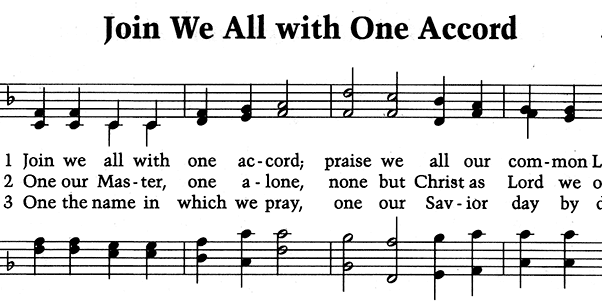 The recent discovery of a 3 x 6 ½” 1867 Moravian communion hymn book in the attic during the restoration of the Heinrich Herbst house in Old Salem is a fine example of the evolution of hymnals for different purposes. The selections in the newly found volume were probably taken from the 1851 hymnbook of the Unitas Fratrum, the first original collection published by an American province. Three and a half centuries earlier, in 1501, the first Protestant hymnal had been prepared in Europe by the Brethren. Within four years a version in Bohemian had appeared, to be followed shortly by Polish and German translations. Most of these songbooks were destroyed in the Thirty Years War after the Battle of White Mountain led to the suppression of dissent in Bohemia and the dispersion of the Hussites.

The first hymnal of the restored church was published in German in 1735. A later collection contained over 3000 entries in three volumes and was the source of many abridgements. One was Hymns for Children, intended …to help them memorize hymns, according to the Salem Records of July 31, 1786; a copy is on exhibit in the Boys School Museum. Also exhibited there is a songbook dated 1803 in the language of the Delaware Indians, a mission tribe for the Moravians. The spread of the Brethren had led in 1742 to the beginning of the first translation into English of a hymnal that was finally issued in 1754. It contained 4644 selections; not surprisingly it was abridged in 1789 and introduced into the United States in 1813.

Religion is always in the making, hence the preservation of accumulated choral music through the centuries: glees, madrigals, requiems, masses, Te Deums, Glorias, hymns. Much music seems to appeal to the brain’s intrinsic rhythms so that memory does not require literacy and allows people to store words and sounds for conversion into composition and song. Sentiments of the ages are thus saved and stored in ready metaphors of music that reflect mythic aspects of worship from earliest times. After all, In the rhythms of the heart and mind/emotion and reason do combine.

Seventeenth century relations between Moravians and Methodists have been examined elsewhere on this site. John Wesley, for example, sought to join the Brethren who did not find him acceptable. That he and Count Zinzendorf could not resolve their theological and administrative differences did not prevent them from sharing their commitments to church music. John Wesley wrote a number of hymns and translated some of Zinzendorf’s 2000 into English. And Wesley on his forced departure from colonial Georgia in 1737 stopped in Charleston, S.C., where he arranged for the publication of the first American colonial hymnal. There are four letters, in Latin, from Wesley to Zinzendorf in the Moravian archives in Herrnhut attesting to their intimacy. Many eighteenth century hymnals were quite small and could be carried in the pockets of worshipers to churches that often could not afford congregational collections or facilities for storage. An 1850 songbook of the Methodist Episcopal Church contained 1148 hymns on 736 pages in a half-pound edition with a volume of 22 cubic inches. While Moravians in Wachovia had fine organs and were ever ready to lift trombones in praise and exultation, most evangels like Methodists and Baptists at the time had few musical instruments. For them the loudness of the singing was perhaps considered instrumental in opening the gates of heaven.

No matter their religious preferences, most worshipers would agree with these recommendations for Methodist singers offered in an 1877 hymnal.

“…every person in the congregation should sing, not one in ten.”
“Let all provide themselves with books. Every singer should have a book to himself.”
“Let all sing; generally the melody of the tune.”
“There should be an organ, if possible…”