“The Archie K. Davis Award, named for the late banker, businessman, historian and scholar, is awarded by the Wachovia Historical Society to honor an individual who has made significant contributions to regional and cultural history. It is my great honor tonight to introduce the 2012 recipient of this award: Copey Hanes. 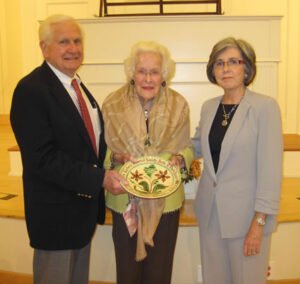 “Not long ago, Copey and I had a delightful lunch together, and she asked me to please keep this introduction short because “people just don’t want to hear all of that stuff.” So I promised her that I would not talk about the fact that she is a founder of Old Salem, a founder of the School of the Arts, a founder of the Winston-Salem Symphony, and a founder of the Winston-Salem Arts Council. I also promised that I would not talk about her 2010 induction into the North Carolina Women’s Hall of Fame, where it was said: “By acting on her love of the arts, Mrs. Hanes has brightened the lives of people not only in her hometown of Winston-Salem, but across the state and nation.” And I certainly agreed not to talk about her YouTube appearance for “Take the Lead” Winston-Salem when she danced to raise money for the Bethesda Center for the Homeless – even though “Take the Lead” could be a phrase to describe Copey’s life in this community.

“It is easier than you think not to talk about those things, however, because they are things that Copey has done, but they are not who Copey is. Copey Hanes is an extraordinarily gifted woman with a true spirit of generosity and humility and a great sense of humor. She is a woman of strong faith in God’s abiding love.

“Copey grew up in Marion, Va., where her father was a Lutheran minister and her mother was a musician. She said, “It seems I always studied piano and voice. My mother was musical and we loved dramatics.” She graduated from Wittenberg College in Springfield, Ohio, and then came to UNC-Chapel Hill to study drama. From Chapel Hill, Copey moved to Winston-Salem in 1940 to teach speech and drama at Salem Academy and has been known to say that she was then “bitten by the Moravian bug.” (Not to mention that she was also bitten by the “love bug” as she met and married Gordon Hanes in Winston-Salem.)

“And that brings me back to our lunch conversation where we talked about how much our present-day city of Winston-Salem owes to the Moravians. Copey said: “Everything really points back to the Moravians, especially the love for the arts, the emphasis on education, a strong business community and even good medical care.” She said that she loves Old Salem in part because it helps to remind people of the values of the Moravians – values that Copey herself holds dear. “I love the simplicity and sincerity of the Moravians,” she said, “they are who they say they are. They were not trying to impress anyone.”

“We ended our lunch talking about our many blessings in this community. I think that Copey is one of those blessings and that Archie Davis would be extremely proud that she is the 2012 recipient of the award that bears his name.

“In closing, I want to refer once again to Copey’s “love of all things Moravian,” and say that I believe she is a true follower of the Moravian motto: “In essentials, unity; in nonessentials, liberty; and in all things, love.”