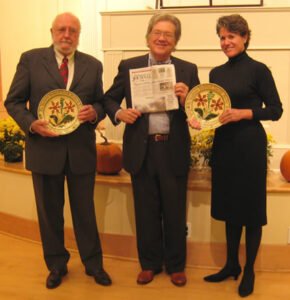 “The 2011 recipients of the Archie K. Davis Award are Mo and Martha Hartley. Tonight’s award is very special because 2011 marks the 100th anniversary of the birth of historian, Moravian and businessman Archie Davis… and it is the first time two people have shared the most prestigious award of the Wachovia Historical Society. I have the honor of making this presentation. I want to review some events in the lives of this remarkable couple.

“First, let me begin with Mo. Michael O. Hartley is a native of Darlington, SC, and an undergraduate of the University of South Carolina. He then ‘went north to University of North Carolina’ where he received both Master’s and PhD degrees in Anthropology. Martha B. Hartley is a native of Winston-Salem and an undergraduate of Hollins College, during which she also spent a year studying in Paris. Her postgraduate work was at the University of Virginia where she received a Master’s degree in Urban Planning and a special certificate in Historic Preservation. In 1986, Mo and Martha began a part-time professional collaboration in response to the threat of an Interstate beltway that would destroy key areas of the Bethania settlement. From the onset, they considered their work to be part of a much larger effort, which they called “The Wachovia Study.” In 1998, they married and now live on a sustainable farm in Stokes Co.

“Next, I want to highlight their professional lives and their intersections with WHS. Currently, Mo is Director of Archaeology and Martha is Researcher and Planner in the Division of Restoration at Old Salem Museum and Gardens. How they arrived at their current positions requires a moment or two. Their 1986 concept of “The Wachovia Study” has blossomed into ground-breaking efforts to consider the system of historic resources that make Wachovia. Importantly to us, their initial 1986 funding came from the Winston-Salem Foundation and, you guessed correctly, WHS. Their work has led to an educational video and other classroom materials specifically designed for 8th grade Social Sciences teachers, to the designation of the once-threatened Bethania is a 500-acre National Historic Landmark, to placing the Adam Spach Rock House (a property owned by WHS) on the National Register of Historic Places and to their major study of the Southern Wachovia Congregations entitled, “There is None Like It”. I would add that this latter effort resulted in 500 acres in Friedland and 2300 acres in the Hope-Fraternity area being placed on the appropriate National Study Lists. Again, you have guessed correctly, WHS has assisted financially throughout the 22 years of these achievements of Mo and Martha.

“Now, I want to conclude with a personal story. I retired at the end of 2001 and became immediately fascinated with “The Wachovia Study”, thanks to WHS members Carl Dull and the late Jack Felts. They helped me become a WHS Board member in 2002. My historical epiphany, however, occurred on September 3, 2003. At noon in the MESDA Auditorium, I first heard Mo and Martha present cogent findings from their study of the Southern Wachovia Congregations. After the lecture, Martha says I shocked them both when I, somewhat presumptuously, announced, “I am going to help you!” On October 16, 2004, WHS and Old Salem held our first joint tour, “The Wachovia Tour” (also subsequently known as “The Moravians are Coming”). It was a sell-out and a smashing success. Mo and Martha have either led or been an integral part of each and every one of our six subsequent joint tours. In April 2005, I joined the Board of Old Salem, where I rapidly confirmed: “If you have a challenging job that needs creativity, give it to Mo and Martha.” Their colleague of long-standing, John Larson, describes them this way, “With over 50 years of combined service, this husband and wife team…(has taught us)… what we have been charged to preserve–above the ground, under the ground and even the very ground itself.” Fortunately for all of us, Mo and Martha consider challenges as “opportunities.” Their “opportunities” have included archaeological excavations, working with college students for university credits, revitalizing the St. Phillips African American complex, and most recently, horticultural outreach now based at the 1771 Miksch House. They have taught 100’s, probably 1000’s, the value of sharing the landscape and history of Wachovia through true “boots-on-the-ground” experiences. Whatever your age (from my grandkids to my retired medical colleagues), or whatever your historical knowledge base, they willingly help you. Their “opportunities” have reflected favorably upon themselves, upon WHS, Old Salem, our community, our state, and, indeed, our nation’s historic interest.

“Mo and Martha are among the best examples of Servant Leaders, known by my wife CarolAnn and me. Their passion for the interwoven histories of the Wachovia Tract and the Moravians makes them unique recipients of the Archie K. Davis Award. Their spirit is reflected in these words from the Moravian Discipleship Liturgy: The fruit of their spirit is “Love, Joy, Peace, Patience, Kindness, Goodness, Faithfulness, Gentleness, Self-Control.” Ladies and Gentlemen, please join me as we rise to honor Mo and Martha Hartley.”