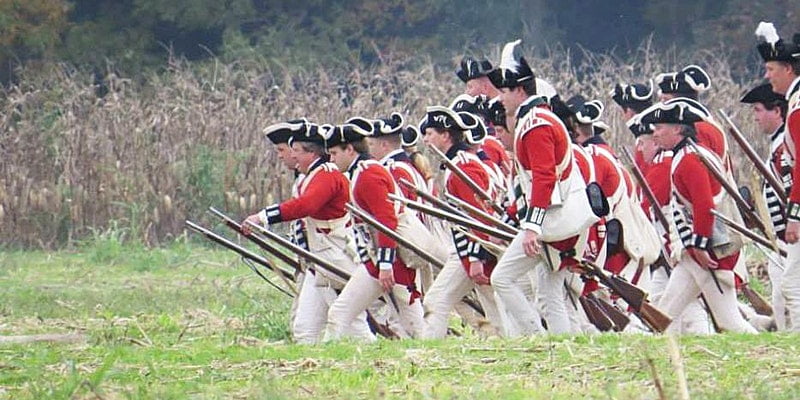 During the Revolutionary War, Moravians in Wachovia were under extreme pressure from the North Carolina colonial government and British troops, and neighbors were almost evenly divided in their loyalties to crown and Continental Congress. Religious, industrious, peaceful, and not takers of oaths, the Moravians asked only to be left alone in their communitarian settlements and were able to have the state government rescind an order in 1778 that they swear allegiance to the rebel cause. As the war continued, loyalties became more conflicted and contending troops often demanded supplies and medical support from the Brethren. Salem was an industrial and craft center in a state with few such resources and could not avoid demands for services or being accused of partisanship no matter the sincerity of their protests.

When a British army under General Charles Cornwallis shifted its attention to the South in 1780, life became increasingly difficult for the Wachovia settlements. British southern strategy was based on the expectation of a massive uprising of loyalist support in the Southern colonies would effectively suppress rebellion. The fall of Charleston and the debacle at Camden in South Carolina seemed to confirm these hopes as many loyalists joined the commands of Colonels Banastre Tarleton and Patrick Ferguson. Encounters became more frequent and vicious. But on the afternoon of Sunday, October 7, 1780 Ferguson’s command managed to get trapped on King’s Mountain and be overwhelmed in less than an hour and a half. The royal legions had lingered too long at nearby Gilbert Town (now Rutherfordton) awaiting orders from Cornwallis in Charlotte and on moving east found themselves encircled by Whigs from what is today’s east Tennessee, southwest Virginia, and the Carolina Piedmont. It was no contest and the patriots found themselves with about six hundred prisoners, most Tory neighbors. Penelope Niven notes in Old Salem: The Official Guidebook, Bethabara hosted five hundred soldiers and three hundred prisoners for nineteen days. Tories were still active in the region and many Moravians remained loyal to the crown so that Wachovia was still in danger.

Lt. Anthony Allaire of the Loyal American Volunteers, Ferguson’s adjutant, kept a diary that records the British march from Savannah, attack on Charleston, the battle of King’s Mountain where he was captured, his evacuation to Wachovia, and his escape from Bethabara on Sunday, November 5. His entries tell of the defeat of Ferguson’s army, his four weeks in captivity, escape, and subsequent return to Charleston. The first extract is concerned with the battle on the mountain.

Saturday, 7th: About two o’clock in the afternoon twenty-five hundred Rebels…attacked us…their numbers enabled them to surround us. The North Carolina regiment seeing this and being out of ammunition gave way. Capt. DePeyster, on whom the command devolved, saw it impossible to form six men together; thought it necessary to surrender to save the lives of the brave men who were left. We lost in this action Maj. Ferguson…had eighteen men killed on the spot…Of the militia, one hundred were killed including officers; wounded, ninety; taken prisoners, about six hundred. Rebels lost Brig.-Gen Williams, one hundred and thirty-five, including officers, killed; wounded, equal to ours.

During the next six days the victors and their captives moved nearly seventy miles through not always friendly territory and on October 14 Whig leaders ordered the execution of three loyal militia officers suspected of stirring up the countryside.

Sunday, 15th: …The Catawba river was forded at Island Ford, about ten o’clock at night. Our march was 32 miles. All the men were worn out with fatigue and fasting-the prisoners having no bread or meat for two days before…About one hundred prisoners made their escape on this march.

Three days later after marches of almost forty miles, the tired troops reached Moravian creek, and halted. On October 19th, after covering twenty-two miles they forded Moravian creek, passed by Wilkes Court House, and halted.; They were in Tory territory where Tory women brought us butter, milk, honey, and many other necessaries of life. Moved at ten o’clock in the morning and marched fourteen miles to Mr. Headpeth’s plantation, a great Tory.

Sunday, 22nd: Moved at ten o’clock in the morning. Obtained liberty to go forward with Col. Shelby to Salem, a town inhabited by Moravians. Rode ten miles, and forded Yadkin river at Shallow Ford. Proceeded on fourteen miles further to Salem. Went to meeting in the evening; highly entertained with the decency of those people, and with their music, Salem contains about twenty houses, and a place of worship. The people of this town are all mechanics; those of the other two settlements are all farmers, and all stanch (sic) to Government.

Monday, 23rd: Lay at Salem in the evening. Two Continental officers slept at the tavern, on their way to join their army. One Mr. Simons, a Lieutenant of Col. Washington’s dragoons, pitied our misfortune in falling into the hands of their militia.

Tuesday, 24th: …marched six to the old town called Bethabara…This town is about as large as the other; but not so regularly laid out. The inhabitants very kind to all the prisoners.

Here soldiers and captives remained for several days, their routine interrupted by a Presbyterian sermon, truly adapted to their principles and the times; or, rather, stuffed as full of Republicanism as their camp is of horse thieves and jawing between Rebels and their captives almost led to the execution of a prisoner.

Tuesday, 31st: Rode to Salem… This night very cold; froze ice a quarter of an inch thick-the first this fall.

Thursday, 2nd: Took a walk to Bathania, three miles from Bethabara. This town contains about thirty houses; it is regularly laid out.

Sunday, 5th: Set off from Bethabara with Lieut. Taylor, Lieut. Stevenson, and William Gist, a militia-man, about six o’clock in the evening. We marched fifteen miles to Yadkin river; forded it, found it very disagreeable. We continued on twenty miles farther to Mr. Miller’s plantation, an exceeding good subject. Here we arrived just at daybreak the next morning.

After slipping away from Bethabara, Allaire and his small contingent worked their way south, finding safe haven with Tory families who helped guide them through contested territory. In an extremely cold fall they negotiated the Brushy Mountains in ten days without confronting their foes, crossed the Pacolet and Tyger rivers in South Carolina, and reached the security of the British base at Ninety Six, SC, on November 24. Five days later he was in Charleston having traveled three hundred hard and dangerous miles in twenty-four days. He retired from military service in 1783 and settled in New Brunswick where he died June 6, 1839, at the age of eighty-three years.

With their defeat at King’s Mountain, British strategy began to unravel. Although parts of the Piedmont remained strongly Tory, the drive for a loyal militia lost its appeal. Tarleton’s command and David Fanning’s Tory horde were still dangerous but the flanks of General Nathaniel Greene’s army were more secure. After Tarleton’s army was routed on January 17, 1781 by General Daniel Morgan’s forces at Cowpens, SC, a few miles from King’s Mountain, Lord Cornwallis was left only with his own immediate command. In February he was in Salem which was in chaos on his departure. A major encounter without a clear victor with Greene’s army shortly thereafter at Guilford Court House set the British on the road to Yorktown where they surrendered in October 1781, a year after their defeat at King’s Mountain. Wachovia had survived despite its neutrality and uncertain allegiance and was at last free to repair the damages of war and restore order in the three towns.

Kings Mountain and Cowpens National Military Parks are easily accessible from I-85 between Gastonia, NC, and Spartanberg, SC. National Park Service publications about the parks and the battles are well done and provide legible maps of the routes of the opposing forces converging on Kings Mountain. Lyman C. Draper’s Kings Mountain and Its Heroes, Cincinnati, Peter G. Thomson, 1881; New York, Dauber & Pine, 1929, offers the most complete story of the encounter and includes Allaire’s diary and other valuable appendices.