Why Home Moravian Church Faces the Way It Does 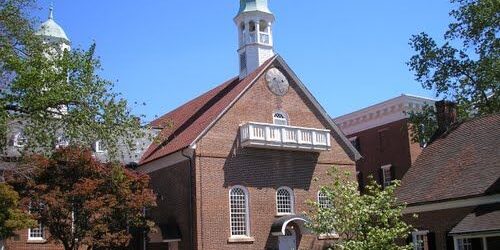 Home Church stands at the northeast corner of Salem Square as it has done since 1800. Unlike the other public buildings in Salem, its narrow side faces the street, and its long sides extend backward. The Brothers House, etc. all have their long side to the street. Home Church’s positioning does not strike us as unusual, since that is the way of most churches we know.

In 18th and early 19th century Moravian Churches, however, the congregation inside sat facing the long wall (as is true in Home Church today), and most were built with the long side to the street or square.

Indeed, the original thought was to build Home Church that way, but then it was realized that if they did that, the sun would shine directly through the clear windows right into the worshippers’ eyes during Sunday morning worship. (The stained glass and choir loft up front were added much later).

They therefore decided to turn the building 90 degrees to avoid the sun problem, and that is why Home Church was built as it is.