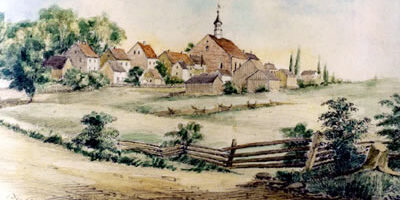 We have great respect for those pioneers who literally carved the early Wachovia settlements of Bethabara, Bethania, Salem, Friedberg, Friedland, and Hope out of the wilderness. How much were they able to accomplish, how much labor did it take, and how much they had to know to accomplish all they did!

Sometimes, though, it is comforting to us who are aware of our own mistakes and inadequacies to realize that those intrepid souls did not always get everything right either.

A good example of this comes from the early days of building Salem when they were clearing land for agricultural fields near where Broad Street now runs down by the Duke Power sub-station.

Trees had been cut, but the stumps remained. Digging them out would have involved untold labor, so they decided to plant small casks of gunpowder among the roots and simply blow them out. That worked fine.

At one stump, however, the gunpowder was placed, the long fuse was run, everyone took cover, and fire was applied. The smoldering trail ran quickly until it reached the little barrel and then Pffft! Nothing happened.

After a while they approached the stump to see what had happened. One bright soul said “The hole isn’t big enough. I’ll fix it.” He thereupon took out a chisel and hammer, placed the chisel at the hole in the barrel where the fuse went in, and swung the hammer. The hammer hit a glancing blow, sparks flew everywhere, and the result can easily be imagined.

Fortunately, none of the Brethren were greatly injured, and the chisel wielding Brother did not lose his hand. We still have not found the hammer, however. For all we know it may have landed somewhere towards the Adam Spach Rock House down in Davidson County.